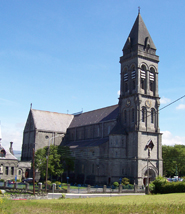 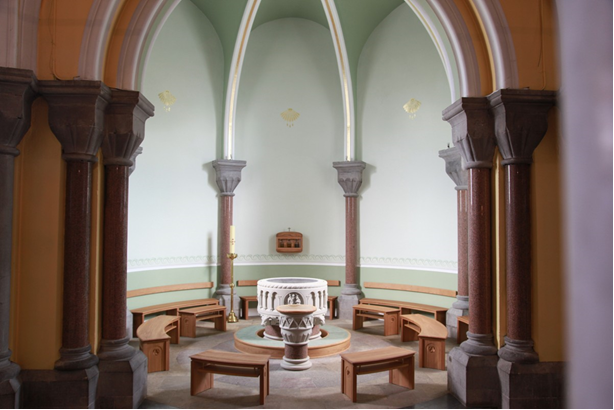 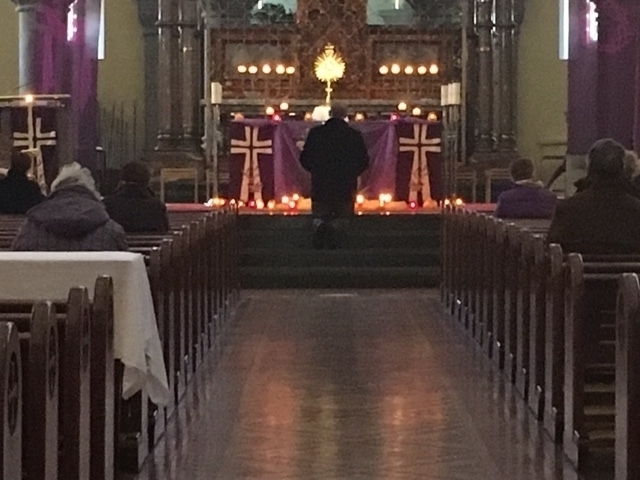 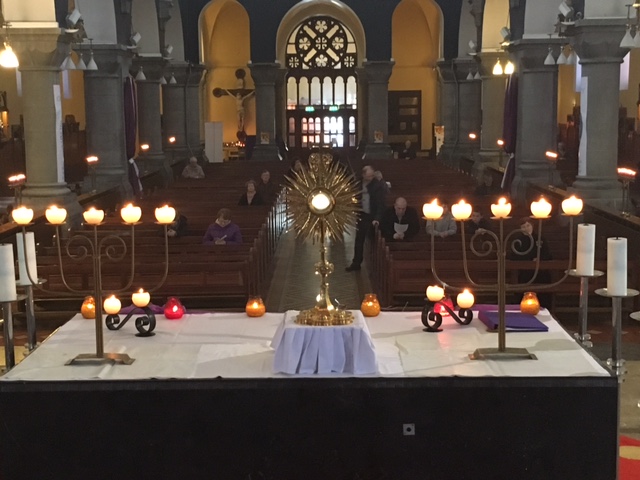 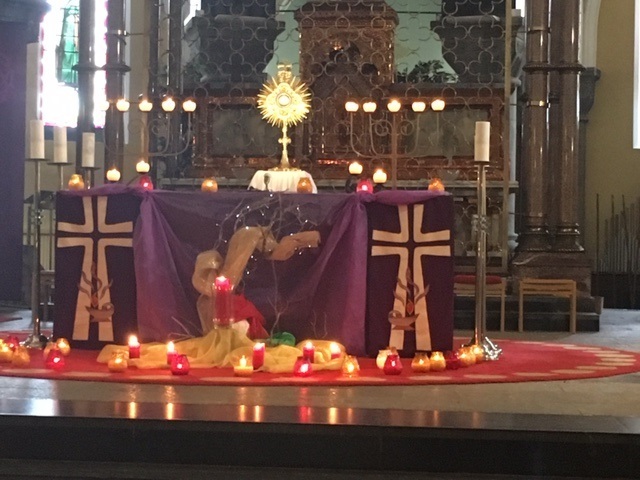 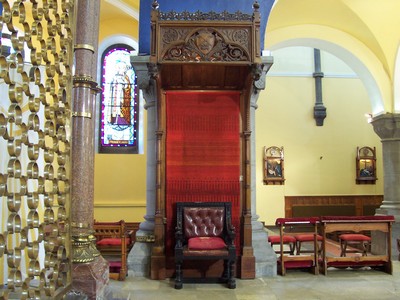 The Cathedral of the Immaculate Conception

Mass may still be viewed through our live stream by clicking the link below. 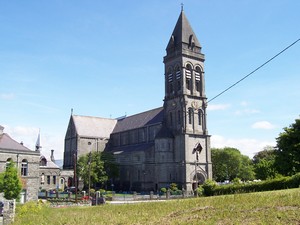 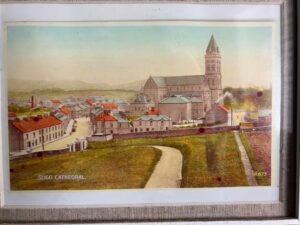 Image of Sligo Cathedral from the old road 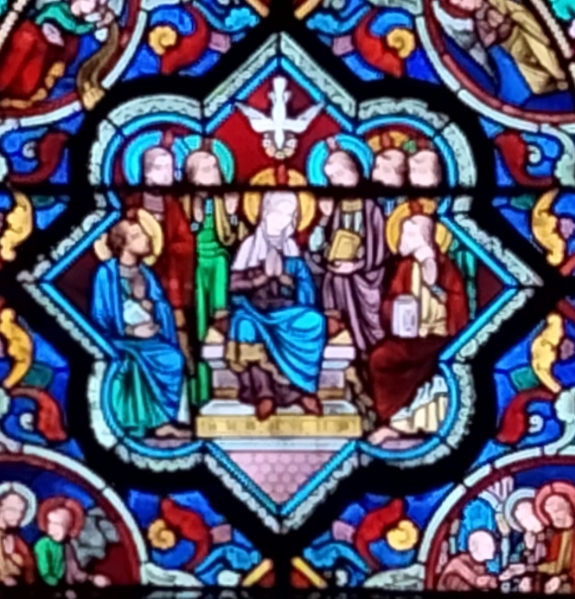 Window of the Week

Week 8 – The eastern transept, on the side of the Cathedral that welcomes daily, the rising sun

This week we return to the eastern transept, on the side of the Cathedral that welcomes daily the rising sun. Now we raise our eyes to the highest panel which depicts Pentecost, which we just celebrated.  We see only a representative group of apostles, seven in all. Interestingly, there are seven writers in the New Testament – Matthew, Mark, Luke, John, Paul, Peter, James and Jude. Perhaps, Lobin depicted them. Mary is seated at the centre, Her hands are clearly joined in prayer. The Holy Spirit, descends like a dove, as He did when Jesus was baptized. The use of non-transparent white glass represents definition, as though you can reach out and touch the divine Holy Spirit. The dominant colour is that deep red, representing the outpouring of the love and the joy of God.

Let us pray for one another that the in-pouring of the Spirit in our lives will produce that same joy, and a renewed experience of that same love every day.

This week we move to the opposite side of the Cathedral and into the Western transept. Up high and on the southern wall is a stained-glass presentation of the biblical figure King David. It is a simple frontal of the saint, with minimalist décor.  Notice the glass has been cut like the saints in the apse, but not stained. The glass is not clear but uses a mottled effect known as ‘cat’s paw’ to maximise the light around the figure. There is a hint of yellow which combined with the mottled effect represents heavenly illumination, which in the context of David, is the most appropriate choice of décor. 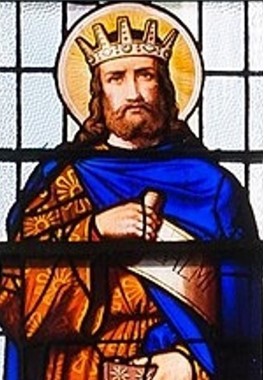 All of the colour emanates from the subject – the biblical figure David – shepherd, king and poet. His crown is ornate and golden – his kingship comes from God, as the colour gold denotes something belonging to God. Interestingly it is the same shape as the watch tower on the flag of Paris (Lobin is French afterall). His cloak is royal blue – a shade reserved for the wealthiest of the wealthy, or most noble of the nobility. We have already associated this colour with hope, with Our Lady, and with Heavens. David is covered abundantly, and completely, despite his flaws. This celebrates the abundance of God’s mercy and love. David’s robe is golden, bearing a pattern representing the sun.

Beneath that he wears a red garment – his joy is the Lord. The technique called ‘drapery glass’ is associated with biblical figures and suggests movement towards light – towards God. One of the key features of the window is David’s harp. The wooden frame and strings are more visible at his feet. His right hand rests on top of the harp while his left hand holds an unfurled banderol or scroll with the word PSALMI written on it. Psalmi is Latin for psalms or songs – and that Book of the Bible, the Book of Psalms is associated with David. A note about the harp. Notice it is not the shape of an Irish harp, which has three sides, like a triangle. This, instead, is an Egyptian harp, made of a single piece of wood, arched to create the tension in the strings. Lastly, notice David’s facial expression – he appears solemn and serious. He looks straight at us, as if he is pleading with us.

Following the arch from the unfurled scroll down to the harp which rests on the cloud, perhaps David invites us to be grounded in prayer through the psalms, a conduit between us and heaven. This Shepherd-King, a man after God’s own heart (1 Sam: 13-14), knew the ups and downs of life, made decisions some of which were heroic, and some of which were sinful if not entirely criminal. His psalms are at times the very experience of the presence of God, and at other times the cry of the human heart having found itself far away from the Lord. They are the first attempt to put language on the mystery of our relationship with God himself. The inclusion of David in the cycle of saints in our Cathedral is a call to read the bible, read and pray the psalms, and allow them transform our relationship with God into something truly human and truly divine, transparent and reflective of the source of light Himself – Christ our Risen Lord. 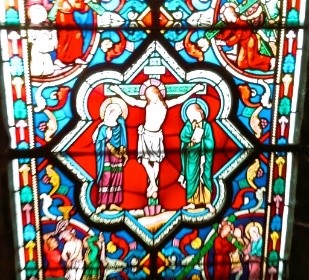 We return to the same window as last week. This week we read the rest of the window, leading us along the way of the Cross, to Jesus’ crucifixion, and then his removal from the cross and his being placed in the lap of his mum. Be aware at all times of the dominance of the colour red – symbol of Jesus’ blood, but also the strongest of our emotions – love, hate, joy, and power. Notice the blooming of foliage and flowers in the decoration – this is a scene of exuberant life, not death. See Jesus is kept company by John and his mum.

Mary’s attire is interesting. In the windows showing her life her clothing is that typical of Byzantine iconography – solid red and green, and the windows about Mary’s life with Jesus in the cathedral show her dressed that way. Her dress in this window is very different and is typical of fabric from Egypt of that time, with a horizontal stripe. Just an interesting detail. At last we see her clad in that heavenly blue cloak, the symbol of hope, devotion and sincerity. Mary’s intimate relationship with God is represented by the gold fringe on her blue cloak.  As Jesus is dying he entrusts her to John’s care as he says to John, “behold your mother” and John embraced her on our behalf. John is presented reverently holding the gospel in his arms for all to see. He is dressed in gold and green – gold to remind us of God’s closeness to all who contemplate the Cross, and all who are familiar with suffering. John is cloaked in green, that symbol of the victory of life over death.

We focus next on the cross. It is essentially black, with a vine growing over it, making the cross appear green. This is the colour that proclaims the victory of life over death. This is the purpose of God revealed, and Jesus has done it! Lobin makes every effort to make this clear – Jesus is the Life, and gave himself in sacrifice for us – so that we would live! This is God’s work of recreation, God’s work of reuniting us with Himself – I am the vine / remain in me / the Father is the Vinedresser. (John 15:5 and following). This is all such good news for us! 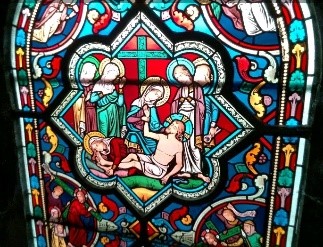 Notice also, Jesus’ halo. Its blue and gold – the presence of God and the hope He gives us through his death, and of course resurrection. But that is a different window. Our invitation is to stand with those who loved Jesus and served him.  To celebrate his victory over death – to remember our baptism through which we are born to new life – life in Jesus. This Holy Week know beyond all doubt that Jesus died for you personally, for you as an individual. That is how much He loves you!

That top panel is our focus now. It presents the Deposition of Christ – like Michael Angelo’s Pieta – the moment Jesus’ dead body is laid in his mum’s lap. John is not included here, instead the window is filled with the presence of those who were unafraid of Jesus’ suffering – his female followers. These female disciples dedicated themselves to Jesus and his service – from their own resources (Luke chapter 8, verses 1 to 3). In the middle of this group is Jesus’ beloved mother. There are echoes of the story of Naomi and Ruth here (the Book of Ruth, chapter 1, verse 16 and following) as these ladies will have stayed also in support of Mary. It is interesting that Lobin puts four other women alongside Mary and Jesus. One is certainly Mary of Magdala – not to be confused with the prostitute who wept on Jesus’ feet in the home of Simon the Pharisee – they are two different women. Mary of Magdala did at some point have seven demons driven out of her by Jesus, but the details of that miracle are not told in the gospels. 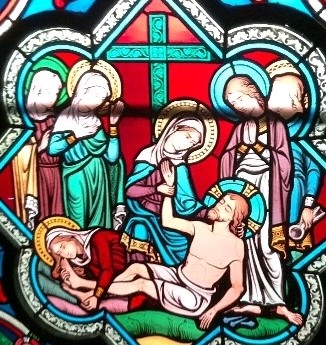 She may be one of the women standing, but it is likely she is depicted caressing Jesus’ feet – that woman’s halo is particularly ornate. That woman could however be Mary of Bethany, who in the days leading up to Jesus’ betrayal poured nard over Jesus’ feet as an expression of her devotion for him. Perhaps the kneeling woman is that unnamed prostitute who wept on Jesus’ feet. Perhaps one of the standing women is Martha, sister of Mary of Bethany? Who knows now. Whoever they are, Lobin’s window is a nod to all the women who followed the Lord and who stood at the cross when the disciples had fled and gone into hiding. There is one other person in the scene, the haloed man at the back of the group holding the pliers that removed the nails from Jesus’ hands and feet, Joseph of Arimathea. A man of courage and action. We stand with them all, we contemplate dedication and faith in action.

The colours and light, the shadows and postures focus our eye on the mother and her son. A sorrowful scene, yet Lobin includes one last symbol. Notice the ground into which the cross is planted when Jesus is hanging on it. Its barren looking. But now notice the ground beneath Jesus’ body – it is lush and verdant. Lobin’s bottom line –  in Jesus’ death on the cross life was victorious, Life is victorious. Let us not hasten on the Easter too quickly. Let us linger and look for the signs of life, the glimmers of hope in this crucifixion scene, and bring that expectation to how we look at our own lives, the lives of others and the world generally.

We are hoping to recommence the Bingo in the Gillooly Hall on a Sunday nights, in order to do so we need new volunteers to help out.

The Parish Shop will be open in the Gillooly Hall: